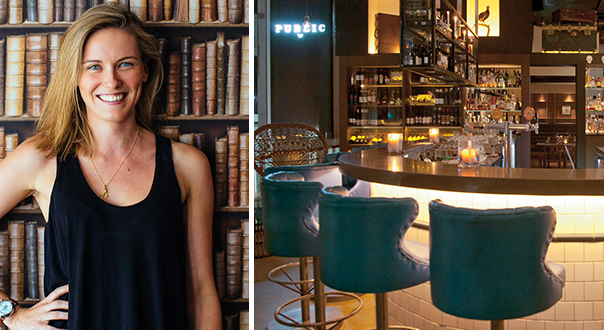 Bonnie moved to Brisbane from London in 2008. She approaches everything hospitality with a sense of fun, creativity and innovation, and is co-owner of Public in Brisbane.

The year 2013 was an extremely turbulent year in Queensland across the hospitality spectrum. Although there were plenty of new venues that opened up in Brisbane, we sadly saw the doors close on several highly respected venues too. I talked with a few of my peers to get their views on why they think our industry is doing it tough. Some of those I have talked with have loved and lost, some are battling on against the red tape, and some just wanted to have their say. One thing they all have in common is the level of respect they have earned as some of Queensland’s best operators.

The name Perry Scott will be familiar to many. He’s the owner and operator of multi-award winning cocktail and wine bar, The Lark, which closed its doors last year. I caught up with him to get some insight into where the struggle began.

Scott opened The Lark almost seven years ago, and has seen some changes in that time.

“Obviously the Brisbane market has changed immensely over this time,” he said. “Most notable in the last five years [is] the wave of new venues that have engulfed our city.”

He thinks the growth in venues is both good and bad.

“It’s a double-edged sword,” said Scott. “With new exciting venues adding to the dynamic, the customer wins. But with this comes a thinner spread of our already small customer base, hence [there’s] more venues, all making less money. More venues trying to get their share of the market means more deals being thrown around, [and] the customer has their pick of the fruits. Their demands and expectations go up and they become increasingly price conscious, which I believe creates a false sense of what a product, and more importantly, what service is actually worth.”

Maybe Queensland needs to look at the number of venue openings granted per square kilometre — this could help control the level of agglomeration to ensure a competitive yet not saturated market. David Pugh, owner and chef at Restaurant II certainly agrees.

“I would suggest a system just like liquor licensing,” he said. “There should only be a set number of venues selling food in one square mile; just like bars, licences are given out and once they are allocated, you can’t open a new place until one closes. Far too many venues are opening and closing in record time, or worse, struggling on when their business is unviable. It’s heartbreaking to watch, and means that everyone else takes a hit too, so we all suffer.”

A common issue that everyone I spoke to raised was the detrimental effect of the extortionate penalty rates that employers are forced to pay. The general consensus was that if you chose to work in hospitality, you chose to sacrifice your weekends and nights. You do not necessarily work more hours, just different hours.

With both Canvas and Public, choosing whether or not to trade after midnight, on Saturdays, Sundays or public holidays was, and still is a constant battle. These are the times when your patronage is greatest, yet you are penalised for wanting to provide your guests with a venue to frequent.

Renowned chef, and legend of the Queensland restaurant scene, Philip Johnson opened Bistro One Eleven in October 2012, a sequel to his long standing and highly decorated Ecco Bistro. Barely a year later, Bistro One Eleven was forced to close its doors.

“There is a big issue I would like to highlight, apart from penalty rates. I simply don’t understand the rationale behind payroll tax,” he said.

“We went from employing 25 people at Ecco to employing 65 at Ecco and One Eleven combined. You would think that would be a good thing for the state in regards to employment solutions. But instead I was hit with an $80,000 payroll tax bill. Where you find that sort of money in a small business I have no idea.

“This was, in part, one of the reasons for One Eleven’s demise and the debt is still being paid off through Ecco, even though a huge portion of it was a One Eleven debt. Even though I had to put One Eleven into liquidation, I am still paying off this tax bill. Why does this tax exist? Why is it considered fair?

“The Restaurant and Catering Association figures show an average profit margin of around 2.9%. So with payroll tax at just a touch shy of 5% I’m sure you will agree that’s a negative position for many people. I personally from now on will keep my wages under the threshold of $1.1 million.”

These are but a few of the challenges that we face in our industry. If I was to go through them all I would take up the rest of the pages in this issue. It is important that we all vocalise these issues as much as possible. Restaurant and Catering have just released a survey in regards to the issue of penalty rates and there are plenty of other bodies waiting to hear your side of the battle. Don’t just sweep them under the carpet, talk amongst yourselves, get your opinions heard. When I was overseas in the UK last year, I often heard Australia described as the new culinary capital of the world. We have some of the most incredible produce, farmers, chefs and bartenders gracing our country. The food and beverage industries are vital to our economy, not just to support our ever growing tourist industry but also to showcase one of the things we do best and keep us in the global spotlight.

I am often asked why I chose to move to Australia, and more commonly, why Brisbane. My answer? Brisbane is hungry. But I know I don’t just speak for Queensland when I say this. We can only hope that those that can act hear our struggles and realise that something needs to be done about the ridiculous costs associated with running a small hospitality business. What would Australia be without our illustrious restaurant and bar scene?