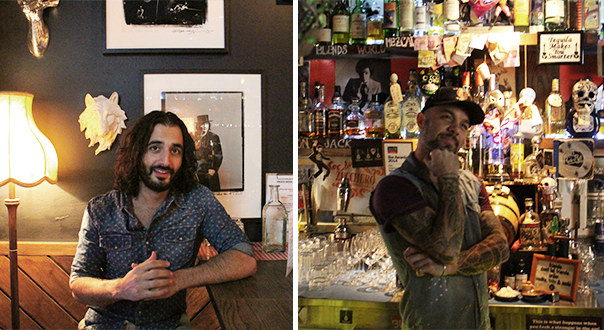 Vasco in Sydney may be a small bar, but it’s got an arena-rock sized reputation for a rollicking night out. We asked bartender Michael Nouri some questions for an Introducing profile, like what it’s like to work at a bar where the amps go to 11 (and alongside the big personalities that are the bar’s owner Max Greco and award-winning bartender Luke Ashton). He gave us this playlist as a guide to a night behind the bar.

“The Vasco playlist starts with the sounds of post work relief and rock & roll cracking over the relentless Cleveland Street gridlock. It gets my heart racing every time!” he said.


“I’ll creep in through the back door, stepping over the trio making out on the courtyard couch who are hardly noticed by the group of colleagues guzzling their G&T’s, releasing the pressure of the weekly grind. Sneaking into the bar, I’ll be sure to spot and salute half a dozen regulars (buried in their bourbons), whilst scanning the room for the party animals (yelling and spilling their cocktails), the Tinder daters (buried in each other), the Vasco virgins (staring in awe at every inch of the joint), the vodka, lime and soda drinkers (always unimpressed), and the cocktail geeks (perched at the bar requesting their next drink from the trusty cocktail app). The variety is endless and endlessly entertaining!”

“Of course, we cannot start a night without the proper formalities; Ciao fratello! Come stai habib?! Bene, grazie. E tu? At best, it usually takes about fifteen minutes to hug, kiss, slap and consensually molest each member of the crew, before diving into discussions about the days shenanigans, whilst sampling a new tequila Max had sent over on the back of a Mexican pigmy donkey owned by Don Julio himself! The camaraderie is what I’ve always found most endearing.”

“Now, we’re four deep and proper warmed up. We’re punching out cocktails, shots and beers by the dozen, anticipating every move. We’ve got drumsticks in our holsters, the room is buzzing, it’s highly likely that you’ve been introduced to Max’s torso, or his brother Claudio, and we’re all slipping, sliding, twisting and dodging each other in the most coordinated display of spontaneous alcohol aerobics you’ve ever seen. Yes, the bar is tight. Yes, sometimes we crash into each but damn it if you can’t tell me we look like the best bunch of well lubricated tango dancers you’ve ever seen! I know it’s only rock & roll but I like it.”

“Luke likes to refer to Max and I as Sydney’s worst backup band. Personally, I think we’d be better if he took his angelic voice to the microphone. Now, in my defense, it takes a special type of mental and physical ambidexterity to take an order, stir a negroni, shake a tommies, and play the drums, at the same time, without missing a beat. I’ll get it right one day. In the mean time, be sure to request Luke’s rendition of ‘Summer Rain’ next time you’re around. It’s exceptional!”

“It’s last drinks, love is in the air, and to hear a full house belt out this song in unison is a special thing indeed!! At this point, you may also find an Italian hanging from the ceiling.”

“It’s never been so enjoyable kicking people out as it is to this song. We love you. You’ve been amazing. Stop raping each other’s faces. Pay your tab. Don’t forget your shoes. Thank you and buona notte!”

0
Australian Bartender August 1, 2014
No Comments Yet