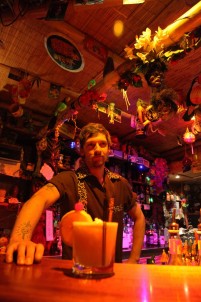 What does Tyawan, an Aboriginal witch doctor, a virgin Polynesian Princess called Loka Kemoa and Seamus Morgan, a former treacherous pirate of infamy, have in common? Easy. These three equally colourful characters were the finalists in the recent Appleton estate Tiki Mug competition that sought to bring out the wacky, encourage the bizarre and promote lunacy all in the name of creating immortality – and a damn cool tiki mug to boot.

With over 40 entries for this year’s competition there were some pretty serious contenders for the crown, however a winner stood clearly apart from the crowd. Pete Long, from Perth’s Hula Bula Bar (a place that could be described as the beating heart of Australian tiki), and his alternate personality Seamus Morgan took out the coveted prize.

“This competition has been a wonderful exercise to involve the bartending community in the creation of a product that they already know, love and use,” said Brown Forman’s Darren West.

Taking out the top spot includes a once in a lifetime trip to Jamaica to visit Appleton Estate, as well as the privilege of having his tiki mug produced and distributed on a national scale.

“This competition has been a wonderful exercise to involve the bartending community in the creation of a product that they already know, love and use.” Darren West, Brown Forman

“I am pretty awestruck by the thought that my mug will be sent to bars throughout Australia and enjoyed by countless amounts of rum lovers,” said Long after hearing of his win. “It’s great to be a part of it and I’m damn pleased I get to work with amazing designers to bring out the best mug yet!”

“The inspiration for my idea came from a board game I’ve been developing on and off for a few years. It’s using my own illustration and ideas. It’s pirate themed and involves a lot of cool junk like voodoo, cannibals, a volcano, rum, a giant squid, rum, more rum…”

“Seamus Morgan is the voodoo ghost pirate villain,” Long stated. “The character developed over a long time while creating my game, so it was amazing to have a competition like this one pop up where I had such a great submission ready to go – Seamus Morgan is a conglomerate of everything I love that is evil about pirates and ghosts.” Of his impending trip Long stated; “Visiting the Appleton Estate is also a really great opportunity for a bartender who works at a bar that serves 80 rums and I can’t wait to see it made first hand.”

With this year’s competition a huge success bartenders can expect to have more opportunities in the future to get involved says West; “The overwhelming response, as well as the calibre of entries, re-affirmed our decision to extend the design process to the industry and motivated Appleton Estate Rum to pursue this competition for future Tiki Mugs.”

Seamus Morgan, a former treacherous pirate of infamy is now a ghost pirate, a disturbed soul. Morgan met his end when he was drawn and quartered, leaving his remains to be scattered over a remote tropical island. He haunts the island in this scattered state – practicing powerful voodoo over the forces of nature surrounding his home; volcanoes, tidal waves, and the deadly kraken that lurks beneath the waves. In Morgan’s quest for eternal rest, ships and standing crew are drawn to his shores, where they are condemned to risk the dangers of the island to return his bones to his grave. 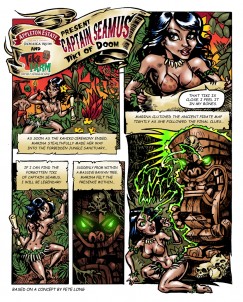 0
Australian Bartender July 1, 2011
No Comments Yet

Gentleman’s Sour – a classic whiskey sour made the Tennessee way