The cocktail shaker is far more than a simple tool for bartenders to prepare drinks in. It has over the past century become a symbol for civilized society, for elegance, sophistication and the embodiment of good times… Sven Almenning dusts off some antique gems and takes a look at the history behind this, the most indispensable of bar tools…

There is no doubt that the cocktail shaker is the quintessential barman’s tool. Yet – when the eminent Jerry Thomas released the world’s first bartender’s guide in 1862, the cocktail shaker was yet to be formally invented. Rather than using ‘proper’ shakers, bartenders would use tumblers, of slightly different sizes, so that one would fit inside another, and then shaking them, creating the prototype of what we know today as a ‘two piece’ or a ‘Boston shaker… In the case of Jerry Thomas the tumblers would likely have been sterling silver, but for less notorious bartenders, chances are they would have had to make do with less expensive metals

When the cocktail shaker finally made its official debut at the patent office, it was as an improvement on an existing formula. The design submitted by New Yorker, William Harnett featured an ‘Apparatus for Mixing Drinks” which was designed to hold six ‘two piece’ shakers at once. Connected to a plunger, the device would shake all six simultaneously, once the plunger was depressed and released. “The great advantage of this apparatus will be fully appreciated by those skilled in the art”, the patent application claimed. In the years to follow a number of patents were lodged with various changes and improvements. Unfortunately few of these have survived, and the two piece has remained in essence as is was first conceived, using two vessels that fit together… Still the professional bartender’s choice… 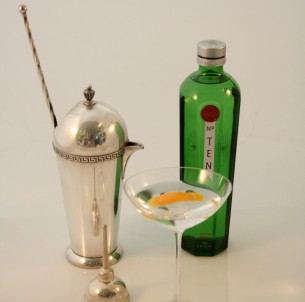 Why we call it a Boston shaker is anyone’s guess. According to one theory, placing the glass inside and on top of the tin resembles a lighthouse. The name Boston, is then meant to refer to the Boston Lighthouse. Another theory says the two piece shaker with a glass was used on passenger boats that worked out of Boston to US and UK ports, this is where people saw them 1st, and so referred to them as Boston cocktail shakers

The design that we most associate with the cocktail shaker, was introduced on June 24th 1884 by Mr. E.J. Hauck. when he patented his ‘Shaker for Mixing Drinks’, introducing the first three piece shaker with a built in strainer. Not only has his design endured as the pre-eminent symbol for bartender’s art, his design was better than most on the market today, as it featured an air-vent for easier pouring that has lacked on many of the shakers following after it.

So it may seem that the story ends there. The shakers we know today were created in the mid to late 1800’s and have largely remained unchanged since… True, but if you dig deeper, you’ll find that in between the early days of cocktail culture and today’s cocktail renaissance, the cocktail shaker came into its own, becoming a symbol of elegance and sophistication, arriving in a plethora of designs, colours and materials to choose, allowing drinkers, connoisseurs and socialities to mix their cocktails in highly individual cocktail shakers.

The cocktail shaker was for a short moment a fashion accessory in its own right.

The Jazz Age / The Roaring Twenties

Wars are great for the economy! And with World War I just over, Americans were flush with money. As were the French and English. Cashed up and eager to rid themselves of the trauma of war, people were ready to party. However, the post-war bender was short lived.

Dubbed the noble experiment by president Herbert Hoover, Prohibition had more or less the opposite effect to what its intentions were. Rather than discourage drinking, it liberalised it. Whereas women were hardly allowed to drink in public prior to the Volstead Act’s introduction on January 16 1920, the Speakeasies that followed immediately opened its doors to them; potentially doing more to liberalise women than their right to vote…

And whilst there may not be too many good things to be said about the drinks that were created during the following 14 years of ‘dry’ America, this certainly was a time when the Cocktail Shaker was given a chance to shine… 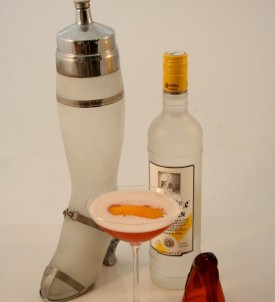 One of the first designs to follow the two & three pieces we today are so familiar with, was that of the tea pot. The English habit of serving afternoon tea at five o’clock turned in the slightly more progressive America into the five o’clock cocktail hour. Whether this was to conceal the fact that cocktails were being made and served during prohibition, or whether it was simply a matter of tradition, doesn’t really matter. Fact is, that the tea-pot design for long ruled as the leading style of shaker, for the image conscious drinker. The affluent preferred sterling shakers by makers such as Asprey, Tiffany, Gorham or Cartier, whilst mere mortals made do with silverplate…

With the production, serving and sale of alcohol being banned, it would be natural to assume, that the evolution of the cocktail shaker would have stopped, but no… Just as drinkers found their loopholes, as did those who designed and produced cocktail shakers. People were drinking more than ever, both at home and in bars and thus, on patents during prohibition, we find a number of innovative and creative ‘beverage shakers’. Amongst them the first shaker to incorporate a juicer where the strainer traditionally would sit.

Prohibition was also the time of the novelty / figural shaker. What better way to conceal your cocktail shaker, than to have them designed to look like anything but a cocktail shaker? One of the first figural shakers made was introduced in 1926 by the Derby Plate Silver Company. Designed by George Berry, this eight-piece beautiful shaker was silver plated and had simulated cow-hide grain, leather straps, stitching and ball bag, and came with six gold lined cups on a tray. Soon after, in 1929 arrived the Boston Lighthouse shaker by International Silver. It was modelled on America’s first lighthouse built in 1716, and rebuilt in 1859. It came in two sizes with the larger housing a music box that would play ‘How Dry Am I’, or ‘Show Me The Way To Go Home’. Both of these designs are highly sought after by collectors today and fetch several thousand dollars a piece at auctions.

On the whole, Jazz Age shakers were all about style and elegance. Affluent drinkers bought elaborate shakers, often hand made and made from sterling silver, and other high quality and expensive raw materials. Prohibition may not have produced many great cocktails, but it certainly left a legacy of beautifully crafted cocktail shakers. 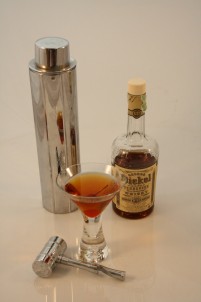 The American stock market crash on ‘Black Tuesday’, 29 October 1929, changed the world. The roaring twenties woke up to a massive financial hangover and some 12 million Americans alone lost their jobs over the next months. The depression had begun and its effects were felt globally. However, booze is not just a celebratory drink, it is also a drink to mourn your losses in, and when the times are tough, good liquor can be a great companion and soul-mate, so despite the hard times there was still a market for people who wanted to make cocktails and escape from the ‘stress of it all’…

And just like prohibition didn’t halt the progression of the cocktail shaker, neither did the depression. It did however influence its design and the materials used. In fact, the following years leading up to WWII are to many experts considered to be the gilded age of the cocktail shaker. This was the age when industrial designers such as Norman Bel Geddes (a set designer for theatre who opened one of the first industrial design studios in 1927) and Lurelle Van Arsdale Guild made their mark using streamlined designs in polished chromium, aluminium and thermosetting  plastic (such as Bakelite and Catalin). The fascination for technology and innovation made machine made technologies more accepted, and designs became more futuristic.

Some of the most striking designs from this time includes Lurelle Guild’s skyscraper set from 1932, Norman Bel Geddes’ Revere Manhattan cocktail set, and the more affordable Chase Gaiety Holiday Cocktail Set. (The latter was promoted as a free gift for anyone who purchased 650 packs of Kool cigarettes and had the coupons to prove it).

But it was not only about chrome and plastic, the decade between 1929 and 1941 also marked the arrival of mass made glass cocktail shakers. To meet the demand for cheaper products, hand blown or cut glass was surpassed by machine made methods using moulds instead. Brands such as Heisey, Hazel Atlas, Cambrdige and Imperial launched colourful shakers featuring silk screens, etched patterns and metal overlays…

When the depression finally ended, it was of course to launch yet another war. This time WWII, and those who once made cocktail shakers again turned towards using their metal for warfare. When the battle finally ended in 1945, we had entered the Atomic age (the era following the detonation of the first atomic bomb), and the big bucks was in building cars with lots of chrome, home appliances, and televisions, and of course ongoing armour for coming wars and battles… America has more or less remained at war ever since… The cocktail shaker lost its allure, as had the art of classic cocktails two decades earlier, and rather than holding its proud position on the mantle piece or on the home bar, it disappeared into closets and cabinets…

As we hark on about the resurgence of classic cocktails, we’re also experiencing a renewed interest in the bar tools of the past. Shakers, jiggers, spoons and other bar paraphernalia, now almost a century old, are again making their way back into the limelight, with both bartenders and art collectors polishing them back to their former grandeur.

The second coming of the cocktail shaker may well be here!

Yours in high spirits,

Sven Almenning is the founder and director of Behind Bars, Australasia’s largest bar industry consultancy outfit. Classifying themselves as a consortium of bar, spirits and cocktail geeks, Sven and Behind Bars have over the past 2 ½ years trained over 25,000 bartenders in Australia. A collector of interesting and antique bar and cocktail paraphernalia some of Sven’s collection will be on display at Melbourne’s 1806 during the World Cocktail week in May. He can be reached on: Sven@BehindBars.com.au