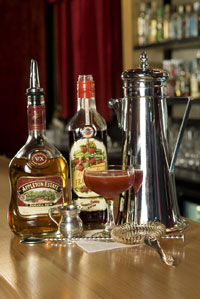 With more and more bartenders and bars looking back at older and older drinks, it is about time we talked about one of my all time favourites, The Shrub. It’s possible that the word comes from the Arabic sharab, meaning drink, just like julep is a variation of the Arabic julab.  What we do know is that the Shrub begins its life before cocktails really exist as an old American preparation from the 1700s.

The Shrub was a way of preserving soft fruit like raspberries, currants, cherries and even peaches.  Discussion of these preparations is mentioned in books like McIver’s Cookery 1773, American Frugal Housewife 1833 and The Virginian Housewife 1838.  The drinks discussed were personal household creations that depended on what was grown on the property, and what alcohol was readily accessible.

The City Tavern in Philadelphia has served a variety of house-made shrubs since it first opened in 1773.  For a concoction to be well enough known to retail successfully, means that is was already popular and the Tavern was probably re-creating the taste of the homestead for those stuck in the big city.

A basic Shrub began with the harvesting of whichever local crop was ripe.  For example, when the raspberries were in season, there would be a communal harvesting, and then the various households would each take their share, especially as raspberries were generally a wild crop, and would begin to prepare their Shrubs.  A simple recipe was to boil the berries with sugar, then strain off the juice and mix with equal parts rum or whiskey. This would then be bottled, generally with the addition of a little vinegar or citrus juice, and aged for up to three months. The final liquid was drunk with equal parts water and Shrub mixture.  When “…mixed with water is a pure delicious drink for summer.” American Frugal Housewife. 1833.

Each household would have their own recipe loosely based on this general idea. Each area would have a different common crop of wild fruit, so each area would use different local produce. Each locality would also have access to different types of booze: rum, brandy, corn whiskey, bourbon, rye, applejack. Although most recipes contain alcohol, there are a few about that do not, and these generally use larger quantities of vinegar and sugar to ensure preservation. But there was no right or wrong recipe, some would contain honey and others herbs and spices. The earliest recipe that I have been able to unearth was in the British book McIver’s Cookery for a citrus shrub and consisted of:

“For a twenty-pint (ten gallon) cask, take eighteen pounds of single refined sugar, orange and lemon juice, of each one pint (2 quarts), and the grate of four dozen of these fruits. Infuse the grate with rum, and put it in the cask along with sugar and the juice.  Shake it frequently, and stir it up with a stick until the sugar is dissolved; then fill up the cask with rum, and bung it up. Let it stand six weeks or longer, until it fines.” Taken from The Practice of Cookery, Pastry, and Confectionery. Mrs Frazer, 1820, where it was reproduced from McIver’s Cookery. Note that there is no vinegar needed as the acid of the citrus was sufficient.

So what of the Shrub today? Why is it remembered and why is it being made again and again in bars around Australia and the world?  Because the humble household Shrub was in many ways the first fruit cocktail, in the style that later gives birth to abominations like the apple martini, or the lychee martini.

A Shrub consisted of fresh fruit, spirit, sweetener (sugar), and water.  Cocktails were a mixture of spirit, sweetener (sugar), bitters and water.  To my mind the Shrub replaces the bitters with fruit.  It is a much more accurate way to describe fruit with booze, than a martini.  It can be shaken with ice and served straight up, or it can be served over crushed ice.  Indeed, President James K Polk (1845-1849) enjoyed a raspberry shrub with brandy and vinegar, served over crushed ice on a hot day.

The best store made shrubs come from Tait Farms in Pennsylvania (www.taitfarmfoods.com) who stumbled across the old technique when looking for ways to preserve a bumper crop of raspberries.  Since then they have not looked back and anyone in America should look out for a bottle or two.

Sebastian Reaburn is the co-owner of 1806 (www.1806.com.au) and Mixology Management (www.mixologymanagement.com.au)