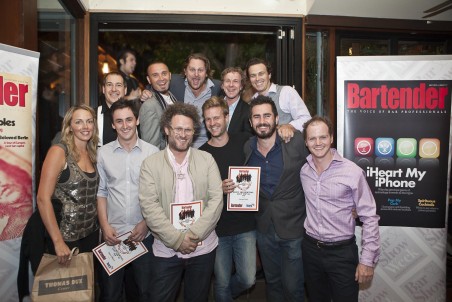 From the original 50 – the Top 10 has been announced

The Top 10 for the Bartender Magazine Most Influential List was announced last night at a sensational celebration held at one of Sydney’s newest and trendiest venues – The Norfolk Hotel in Surry Hills. The pub was packed out with a huge range of industry personalities for the highly anticipated announcement.

Click here to see photos from the Most Influential List party held at The Norfolk Hotel, Surry Hills.

The Most Influential List is a celebrated biennial industry initiative launched by leading trade publication Australian Bartender magazine in 2009 and aims at showcasing the home-grown talent that makes the Australian bar scene what it is today – a thriving and developing culture, full of creative and passionate people.

The Top 50 for the Most Influential List was announced in the March edition of Bartender magazine after an unprecedented response to the online vote. People from all walks of the bar industry were nominated; from designers to drinks writers and trainers, to bar operators, bartenders and beyond.

This year’s Top 10 really shows off the diversity of the Australian industry and recognises a whole range of industry ‘influentials’ for their hard work and ongoing commitment to the industry they work in. “A big congratulations should go to all the finalists in this year’s Most Influential List,” commented David Spanton Editor of Australian Bartender magazine who launched this wonderful initiative in 2009. “All those nominated are on top of their game when it comes to driving the Australian bar industry and they are doing great things in helping promote our national industry as one of the world’s best.”

“I am thrilled to hear that my industry colleagues see the work that I do with the team at Merivale as having a positive influence on the bar and hospitality industry.” – Justin Hemmes

At the head of this year’s inspiring list was Justin Hemmes, a man whose name is synonymous with great industry initiatives, and although he was not available on the night to collect his award in front of his peers due to overseas travel commitments he was certainly excited to hear of his win.

“I am thrilled to hear that my industry colleagues see the work that I do with the team at Merivale as having a positive influence on the bar and hospitality industry,” Hemmes stated.

“There are so many great people in our industry who are all working very hard to place Sydney’s bar scene firmly on the hospitality world stage,” Hemmes continued. “Thank you to Bartender magazine for their constant support for Merivale and the industry, and thanks, of course to my team of staff.”

The Top 10 finalists showcased some established industry names as well as a new breed of up-and-coming industry personalities that are steering our industry in the right direction, proof of the good hands that our precious bar industry is held in.

Without a doubt, the Top 10 are some of the hardest working and most highly respected people in the industry and this was their night – so congratulations to all nominated!