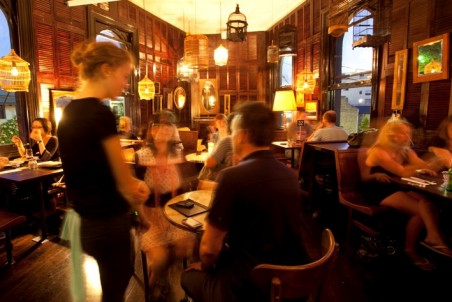 So if you like your beer straight from the tap, the way God had originally intended it, then this is the spot for you. This is beer nirvana. In their opening week back in March they featured about 20 beers on tap including three limited release brews from the Barons Brewing Co, Murray’s German Pilsener, the Bridge Road ‘Chevalier’ Saison, and the Hargreaves Hill ESB. While the comprehensive list may be a little daunting, the friendly staff are eager to help and even will to offer a little sample before you commit. Or you could opt for a tasting paddle – a tour of five beers for $13. Housed in the old Palace Hotel on Flinders Street and in the tradition of its sister venue in the Melbourne suburb of St Kilda, this newbie definitely packs a punch from south of the border, with its laid back vibe and eclectic Melbourne stylings. Co-owner Guy Greenstone says of the place: “A friendly neighbourhood bar with delicious food and the best beers that Australia and the world have to offer.” What more can a self-respecting Aussie ask for?