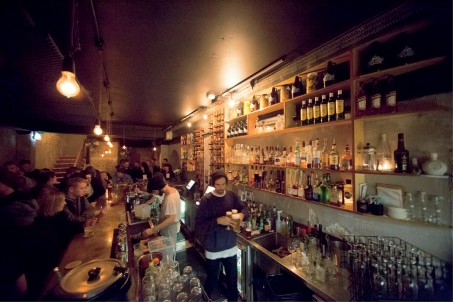 Old Growler isn’t such a new bar anymore, having opened up in the first few months of this year. Things are cracking along well and recently hired ops manager Jordan Blackman (also an Australian Bartender Bar Awards Rookie of the Year nominee) has put in a new cocktail list to go with the  Young Henry’s beer on tap.

There’s a cheeky nod to Jason Williams in the Prohibition Blues, which is their take on a Mary Pickford, said Blackman. “Mary Pickford being one of the first drinks [Jason Williams] taught me,” said Blackman, “so I made it blue.” He’s also thrown a bit of pork fat around, with the El Puerco (Del Maguey mezcal, pork fat-washed Campari, sweet vermouth, chocolate bitters) being accompanied by a garnish of candied bacon.

0
Australian Bartender September 10, 2013
No Comments Yet

Late Night is Back! The relaunch of Club 77 gives Sydney back its beloved dancefloor

The craft beer tasting panel results: from .5 to 4.5 stars

Young Henry’s opening a new bar in the ‘Loo