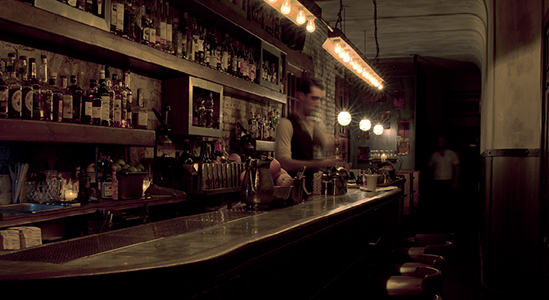 On the weekend, The New York Times has run a nice little look at the words, phrases and banter bartenders bandy about behind the bar. Writer Ben Schott has collated a number of insider terms used by bartenders in some of New York’s top bars — bars like Death & Co., Clover Club, Pegu Club and Employees Only, to name just a few.

They mention “The Boomerang”, which, in our profile on NYC’s Attaboy we noted was the custom of sending a glass of liquor, covered with a latex glove, from one bar to another by way of a valued customer. What the New York Times left out — and what Attaboy’s Sam Ross filled us in on — was that the latex glove is often proudly displaying the middle finger.

We also like Death & Co.’s phrase “family meal” or “time to feed the kids”: it’s for that time of the  night when a round of shots is poured for the staff. Click here to read the piece in its entirety.

So this has got us thinking: what’s some of the slang you use behind the bar? Let us know in the comments and we’ll feature some of the best in the magazine.

0
Australian Bartender February 17, 2014
No Comments Yet